Hizen Province is now Saga and Nagasaki Prefectures.
This province was governed separately, such as Saga area by the Nabeshima daimyo family (330 koku of rice), Hirato area by the Matsuura daimyo family, Karatsu area by the Doi and Mizuno daimyo families.
The Jakushi family in Saga and the Yagami school in Yagami are well-known as good tsuba craftsmen.
And, in Nagasaki where was singular port opened to overseas during the Edo period, the peculiar tsuba that were imitated Chinese sword guard became fashionable.
This style of tsuba is called "Nanban-Tsuba". 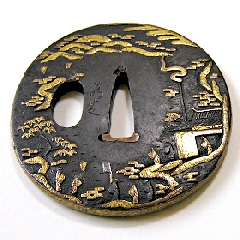 There are several theories about Jakushi in Hizen Province.
Though, it is estimated that two Jakushi existed around the same time who shared the same surname "Kawamura".
Jakushi who found his calling in painting was born as a son of Samurai belonged to the Ryuzoji daimyo family. He went to Nagasaki and studied painting with Chinese Buddhist monk Itsuzen of the Suifuku-Ji Temple. Therefore, the painter Jakushi was good at painting Chinese style Buddhistic drawings or flowers & birds pictures or landscape pictures.
The other Jakushi whose given name is Kizaemon existed around the same time of the painter Jakushi.
The metal-carving craftsman Jakushi studied how to paint and how to produce sword guards under the painter Jakushi.
The Jakushi school for tsuba making continued for several generations from the founder "Kizaemon".
Craftsmen of this school were good at expressing bamboo, landscapes, rising dragons and others in Nunome-Zogan inlay on iron round plates.
Every head of this school inscribed "Jakushi" in running Kanji style on his pieces of works.

"Nanban" generally means European countries in Japanese.
However, "Nanban" in the Japanese sword guard world especially means China.
So, "Nanban-Tsuba" meant exotic sword guards imported from China at first.
Later, craftsmen in Nagasaki of Hizen Province started making similar kind of them, finally, so many craftsmen in Japan started making this kind of tsuba.
As a result, Nanban-Tsuba had a great run across Japan for their exotic designs.
Usually, twin dragons, arabesque, or unique characters are expressed in carving on them.
It is said that the Onitake family in Nagasaki, craftsmen of the Kunishige school in Hirato, craftsmen of the Jakushi school in Hizen and swordsmiths of the Nobukuni school in Higo Province engaged in producing Nanban-Tsuba.