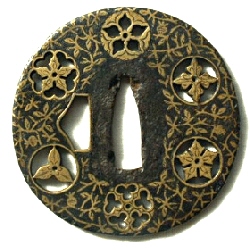 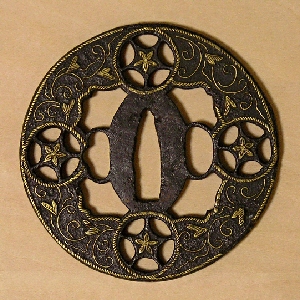 It is generally believed that Yoshiro-Shiki Tsuba catched on big from the Momoyama period (1573-1603) to the early part of the Edo period (1603-1868).
Arabesque, Flowers and family crests were inlaid with brass on thin forged iron plates.
And, several parts were openworked like transom windows of which we can see in Japanese temples or shrines. This technique is called "Ranma-Bori" (=carving like transom window).
At the latter part of the Edo period, sometimes they used Shakudo (alloy of copper and gold) instead of iron, or used gold, silver or Shakudo as the materials of inlay instead of brass.